Beyond Undo Send - Preventing the recipient from viewing the message

This blog was written up after I started noticing some queries on sender's remorse. Questions such as "How do I cancel an email after it is sent out" or "When will Gmail introduce the recall feature before the recipient reads or opens the email" among other similar ones.

All users of Gmail are aware of its Undo Send feature. It allows the sender up to a maximum period of 30 seconds or as otherwise specified in that section under Gmail Settings, General tab after they have clicked on the Send button to cancel the sending.

But, what if you realize the error thereafter?

There is a feature, presently available in Gmail, that, while not allowing you to cancel the sending or recall an email, will permit you to prevent the recipient from viewing the content of the email, which, realistically, is what you would have wanted to do in the first place.

Let us assume a scenario where an email was sent to an external recipient. For this test, I have chosen to use my hotmail.com address as the recipient address.

The email appears in the external recipient's inbox and upon clicking, shows the following. 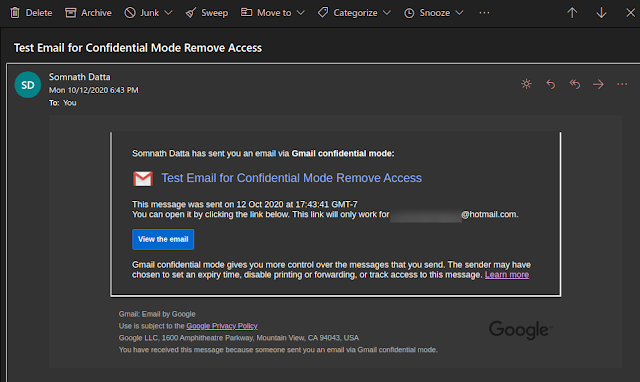 The recipient would need to click on the "View the email" button to see the email, which opens in a separate tab, on a Gmail branded page.

Irrespective of whether the recipient has opened the email or not, the sender has the option to remove access by clicking on the "Remove access" link as shown in the following screenshot.

Once clicked, an "Action completed" confirmation message will be shown at the bottom-left corner of the screen and the clicked link will change to "Renew access".

On the recipient's side, clicking on the "View the email" button, will now show the following message in the Gmail branded page that previously displayed the email.

If you want the proper email recall option, please put in your request directly to the team at Gmail through the steps mentioned here. The purpose of sending Feedback is to give the team a measure of the volume of users been affected by an issue or requesting a particular feature. The larger the volume of users asking for a feature or reporting a bug, the higher priority it assumes for the team to consider.